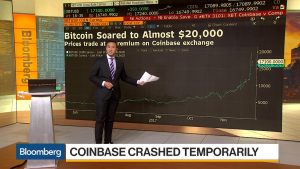 This year, and particularly these last few months, have seen an exorbitant increase in the value of Bitcoin, Etherium, Litecoin, and even a handful of the newer and lesser known cryptocurrencies. Enough of an increase that had you converted the entire sum in your trading account into Bitcoin at the start of the year, just as an example, you would currently be sitting on a twenty-fold increase. That’s 2000% in one year, without having to spend any time trading, analyzing charts, looking at fundamentals, or any of the other activities that we follow as disciplined traders.
One very popular Forex forum I frequent has lately seen all of its once fascinating threads regarding the intricacies of the Forex market devolve into discussions on cryptocurrencies and how people will move all their holdings into Bitcoin for 2018 expecting it to continue rising. And why not? After all, it would have been a very effective strategy had you followed it exactly a year ago. Well, there are several reasons why not, and you don’t need to agree with me on any or all of them, but you really should pay attention to them. Foremost among the reasons is what every trader should know by heart, past performance is not a good indicator of future performance. But there are many more. Here’s my list.

So should you be buying into the craze? I wouldn’t. That doesn’t mean you can’t make money off of the craze while it lasts, though. Some of Bernie Madoff’s investors made money, the ones that pulled out early, taking with them the money of later investors. So if you choose to jump in, at least use what you know as traders and investors. Don’t put all your eggs in the same basket. If you want to gamble on Bitcoin or any other cryptocurrency, do it with money you can afford to lose, and be prepared to lose it. A diversified trader is less likely to blow up. And whatever you do, don’t mortgage your house to buy Bitcoin. The last time people were mortgaging their homes to bet on a market that couldn’t possibly go down was in 2008. Anyone need a history lesson?

Lastly, don’t pay some opportunistic scammer for a class on cryptocurrency investing. It’s not complicated. Let me save you thousands of dollars: So long as you believe it will go up, buy it. As soon as you don’t believe it will continue to go up, sell it. And here’s a free $10 to get you started. Class dismissed.