Musashi Miyamoto, a famous 17th Century Samurai, wrote a book on Strategy that is highly revered to this day by both martial artists and businessmen. Originally meant to be a treatise on swordfighting and strategy (as applied to war), it was found to be equally applicable to business, first by the Japanese, and later by the rest of the world. Today, Musashi’s Go Rin No Sho (A Book of Five Rings) is required study in business schools and military academies.

Musashi’s life is itself worth studying. He spent his entire life fighting, starting when he was 13 years old and fought his first duel. By the time he’d reached the age of thirty, he had fought as many as sixty sword fights. These duels were frequently to the death, and he never once failed to win.

Reaching this milestone, he evaluated his life and his record, and realized that he hadn’t been using strategy. That his successes were perhaps due to natural ability, perhaps to luck, perhaps to the favor of Heaven, or simply to his opponents themselves lacking strategy to an even greater degree. Being the man that he was, he dedicated the next twenty years of his life to studying and mastering strategy. At the age of fifty, he achieved his goal.

For the remainder of his life he continued being a force to be reckoned with. Now without following any particular way, he began applying the principles of strategy to everything he did. He self-taught himself many arts and abilities outside the narrow scope of fighting, mastering these, as well. After his epiphany, he never again fought with a real  sword, preferring instead to use bokken (wooden practice swords), and went to his death undefeated. This despite all later duels being fought with his wooden swords against opponents often armed with razor sharp katana (Japanese swords). 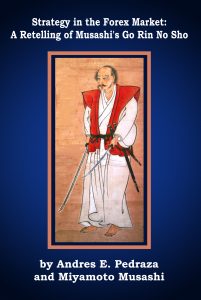 The Go Rin No Sho‘s treatment of strategy as a ruling principle with which any person can succeed at any pursuit has been verified time and time again, in all areas, and in all contexts. Forex Trading is no different. The principles of strategy apply perfectly to trading. Instead of winning battles, we win trades. Instead of commanding armies, we command equity. Instead of intelligence networks, we have our analysis. I’ve been toying with the idea of writing my own Go Rin No Sho for a few years now. As a practitioner of Yagyu ke bujitsu, a contemporary family style of swordfighting that originated around the same time Musashi was founding his school, the Ni Ten Ichi Ryu, I first encountered his treatise in that context. I later encountered it again in the business world and quite clearly saw how his teachings applied there, too.

Once I started writing my version specific to trading, I was amazed at how easy it was to adapt Musashi’s examples to my purpose. The words flowed so easily it was almost as if I were channeling him. I was very pleased by how everything applied without having to be forced. I’d been using Musashi’s teachings in my trading all along, thanks to earlier exposure. Having it brought to the fore of my mind while organizing the material for the book made me realize just how much I’d been relying on strategy without being consciously aware of it.

Strategy is the underlying principle that we at Special FX Academy apply to our trading, and teach to our students. Our third book will be available later this month. I hope you enjoy it as much as I enjoyed writing it. But more importantly, I hope you apply its teachings to benefit your trading. Check this space in about a week for a link to purchase the book, fresh off the presses.