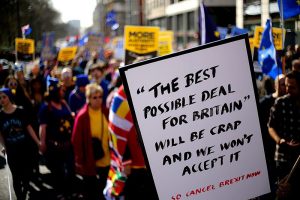 This week, and indeed, the month to follow, promise to be critical for the UK. More than 2 years after the UK voted to leave the European Union, we’re now less than 2 months away from the actual exit. And the UK is no closer today to figuring out what that means than they were back in June of 2018.

Here’s this week’s Forex Outlook on our YouTube Channel, covering how in the past week we’ve seen the British Pound finally begin to falter. It had been propped up for a few months by the misguided belief that it would be easy to make it all go away. Last week dashed those hopes. That’s not to say that there can’t possibly be an 11th hour reprieve, but it does seem doubtful to the extreme.

We are in multiple long term trades poised to deliver on further weakening of the British Pound, and see no reason to change our point of view  (at this time). And, unlike George Soros, back when he was shorting the British Pound to the tune of about US$2B, we’re not trying to convince anyone, or proselytize. You are each and every one of you responsible for how and what you trade. We’re just sharing information.

But here’s the thing, and I am being quite serious. It’s virtually certain that the British Pound will drop a thousand pips (no deal Brexit scenario) or rise about two thousand pips (some sort of resolution up to and including a cancellation of Brexit). There’s way to safely set yourself up to take advantage of either situation, and it isn’t that hard to put in motion. That’s what we do. Every day.

And things like Brexit happen with unfailing regularity. If it’s not Brexit, it’s a US Presidential Election. Or it’s a trade war between global superpowers. Or it’s a (fill in the blank). There’s almost always something going on, or the next something peeping at us over the horizon. Trading these somethings effectively relies on Fundamental Analysis. We interpret what’s going on and what it means for affected currencies. It’s not rocket science. But it does favor those with patience.

Fundamental Analysis is most effective over the long term, allowing you to latch on to long running trends, or alternately, to their inevitable reversals. In the short term, a currency pair’s price can and will go in either direction, and it’s all but impossible to time these movements. Long term? It’s a piece of cake in comparison. That’s not to say that it’s trivial or easy, that’s why it says, in comparison. But with that long term view, and good fundamentals, you’ll be right more often than not.

And this is when it happens. Don’t ignore Brexit and the profit it’s all but delivering straight to your door in the next month or so. It’s the culmination of a fundamental more than two years in the making.